How to Fix High CPU Usage in Windows

Is your PC too loud, hot, or slow? High CPU usage can cause all these issues and more. Learn why your CPU is running high and how to lower your CPU usage so your computer runs normally again. Then, find out how AVG TuneUp can help regulate your CPU usage and optimize your computer. 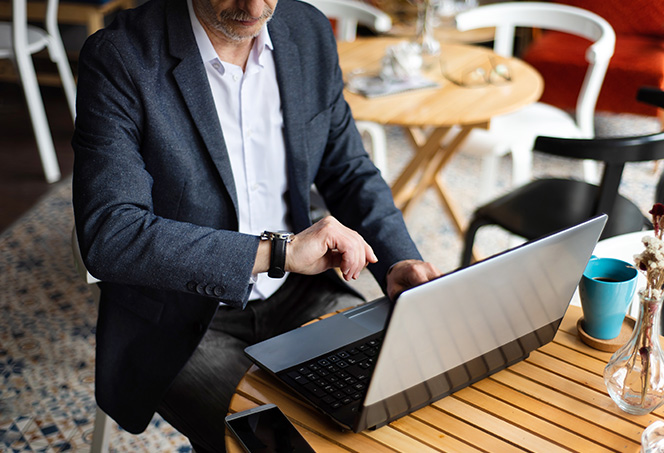 Having a PC with a CPU at 100% all the time is a recipe for disaster. Like driving your car in second gear all day — engine failure is inevitable. To avoid having to replace your CPU or your entire PC, here’s how to reduce CPU usage to sustainable levels.

If you’re unfamiliar with the app that’s causing high CPU usage in Windows 10, look it up online. Chances are that others have had the same issue. If you recognize the problem program and don’t need it at the moment, close it. That should help relieve 100% CPU usage on your PC.

A great way to reduce CPU usage is to close or put to sleep apps you aren’t using. But with many apps, it’s not so simple. Your computer likely has lots of background applications running constantly, even when you’re not actively using them. Uninstalling these programs isn’t always possible — they might be core Windows apps or other programs necessary for your work or hobbies.

The patented Sleep Mode in AVG TuneUp is designed precisely for these situations. Sleep Mode detects all resource-hungry apps and “snoozes” them whenever you don’t need them to prevent high or 100% CPU usage. Check it out now with a free trial of AVG TuneUp. 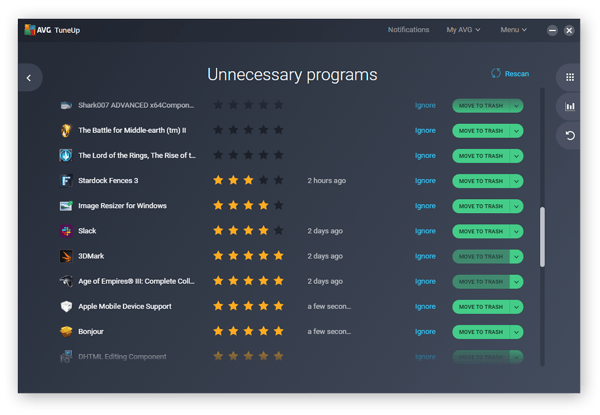 AVG TuneUp lets you hibernate programs to stop your CPU from running at 100%.

Sleep Mode turns off the background activity that causes high CPU usage in Windows 10. You can choose individual apps to hibernate, or put all the CPU-killing apps to sleep at once. The more apps you sleep, the lower your CPU usage will be.

When you need those apps again, AVG TuneUp will automatically wake them back up. You can also use TuneUp to prevent resource heavy startup processes — a great way to reduce CPU usage and improve PC boot times.

Particularly demanding apps like multimedia editing software may push your CPU to 100% even when everything else is asleep. In that case, consider upgrading your laptop or switching to an SSD (solid-state drive).

You should also check how much RAM you have and get more memory if necessary. The apps you use most frequently can help you determine just how powerful a PC you need.

3. Give your PC a physical cleanup

Your PC and laptop can accumulate a ton of dust that will cause trouble if left uncleaned. If it’s been a while since you cleaned out your PC, the inside may look something like this:

When dust collects on your computer’s fans, it prevents them from cooling down your PC. This increases PC temperatures, which can cause your CPU to self-regulate or throttle its performance. When this happens, you’ll quickly reach 100% CPU usage.

If your computer fans are caked in dust, get a vacuum and a can of compressed air and physically clean out your PC.

4. Check your PC for malware

Many types of malware will consume nearly all your resources and get your CPU running at 100% or close to it. Some viruses are even designed to cause high CPU usage. Other malware will eat up CPU power while doing its dirty work, whether it’s adware showering you in pop-ups or a cryptominer generating Bitcoin for the enterprising cybercriminal who planted it on your PC.

Scan your entire PC and all external drives with a malware and virus removal tool. AVG AntiVirus FREE is a totally free anti-malware suite that detects any traces of malware on your computer and removes them before they can do any further harm. And you’ll be protected from that point on as AVG AntiVirus FREE guards your devices and home Wi-Fi network in real time against any incoming threats.

5. Check for outdated drivers and software

Old drivers or flaky pieces of software frequently cause high CPU usage. I recently had a case of unexplained high CPU usage that ended up being caused by a four-year-old Wi-Fi driver that was incompatible with the latest release of Windows 10. A simple driver update fixed the issue completely.

The same can happen to software — an old media player might cause unnecessary processor spikes. To avoid this, update your drivers and software regularly. Updating your audio drivers and using current graphics drivers also ensures that movies and video games look and sound as good as possible on your PC.

AVG Driver Updater monitors your computer 24/7 to detect outdated or malfunctioning drivers, and updates them automatically. With a library of over 5 million drivers, it has any update you might need. 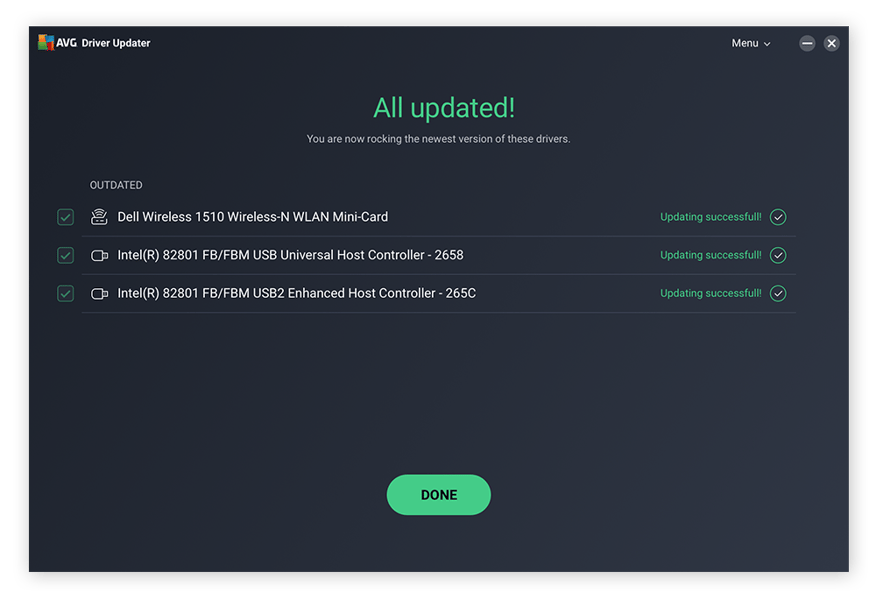 Why should I worry about high CPU usage?

Not all high CPU usage is problematic. If your CPU use temporarily spikes to 90% or 100%, that’s normal if you’re doing intensive tasks like high-end gaming or graphic design. So long as your CPU calms down after you’re done, there’s nothing to worry about.

Consistent and sustained high CPU usage, however, is a potential trouble spot. If your CPU hits 100% for prolonged periods of time, you may experience:

High CPU usage on Windows 10 and older versions can be caused by a range of factors including intensive processes, high internal temperatures, or even malware. If your PC is constantly hitting 90% to 100% CPU usage, check out this list of the most common causes of high CPU usage:

Your PC is working hard

Intensive processes and other tasks consume a lot of your CPU’s processing power. Your PC might be busy installing a Windows Update or rendering a video in the background. In cases like these, high CPU usage is normal.

When the resource-hungry task is complete, your CPU usage should return to below 10%. If not, there might be something else going on.

Your processor's fans aren’t cooling down your CPU

Like all your PC’s internal components, your CPU is sensitive to high temperatures. Regulating your CPU temperature is essential to managing CPU usage, especially during a CPU stress test or when overclocking.

While many CPUs will simply turn off when overheating, others will throttle drastically — for instance, from 4 GHz down to 500 MHz. In these cases, even the smallest workload will cause high CPU usage.

If you’ve overclocked your CPU, you need to be extra-careful about heat levels and loud computer fans. And if it’s been a while since you properly cleaned your PC fans, now’s the time.

You’ve got a malware infection

Many types of malware, especially viruses and worms, will chew through your CPU’s resources. Computer viruses and worms create countless copies of themselves in addition to the other harm they cause, easily leaving your CPU at 100% usage. Viruses can wreak all sorts of havoc on your PC, including high processor usage.

Your drivers or other software are outdated or faulty

Outdated device drivers and other apps can become buggy and even incompatible with current versions of Windows 10. These issues can push your PC up to 100% CPU usage, or even lead to crashes and freezes. Updating your drivers and software is a great way to clean up and speed up your PC.

You have too many apps open at once

If you’re the sort of multitasker who has 50 open tabs and 20 apps running simultaneously, then you’ve got your high CPU usage answer right there. When your PC has too much to do, it’ll work hard to get it all done.

AVG TuneUp prevents programs from running in the background and wasting CPU resources so your PC can focus on what’s important. And by automatically detecting and removing bloatware, junk files, and other space-hogging apps, you’ll have plenty of space for what you actually need.

A specific app is causing the issue

Specific applications and processes are known to occasionally cause high CPU usage. These can include:

In these cases, you may need to configure, reinstall, or remove the offending app. 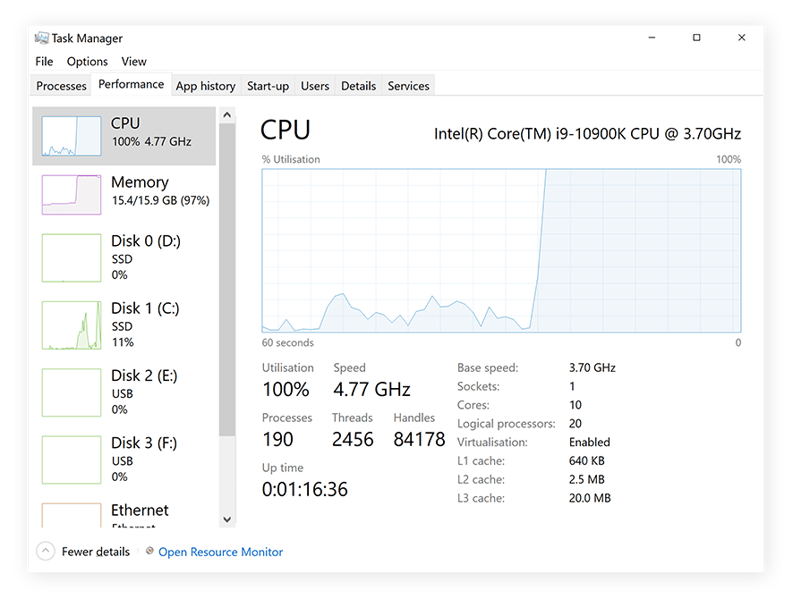 What is considered normal CPU usage?

If high CPU usage is 90% or 100%, what does normal CPU usage look like in Windows 10? If your computer is on, you’ll never have zero CPU usage — your PC is always doing something.

Here’s a look at CPU usage under a few different (normal) circumstances:

When programs on your PC fight over your CPU’s limited resources, you can reach 100% CPU usage in no time. AVG TuneUp automatically detects the apps responsible for high CPU usage and lets you deactivate them with a single click — leaving you with plenty of CPU power for the apps you actually want to use.

Give your CPU the help it needs to give you the performance you want from your PC. Try AVG TuneUp today with a free trial. 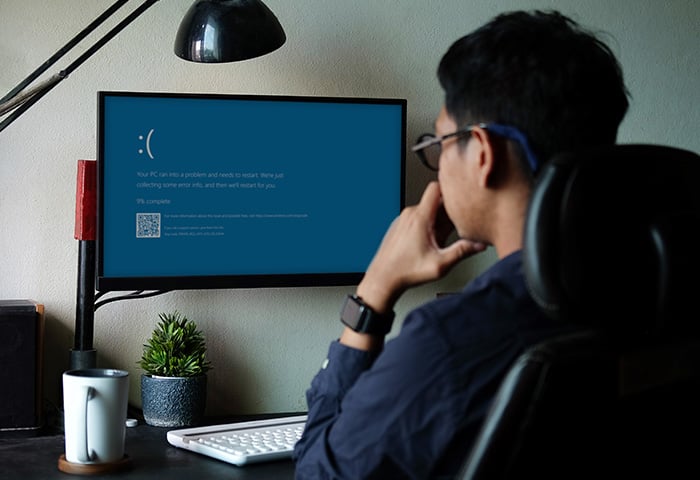 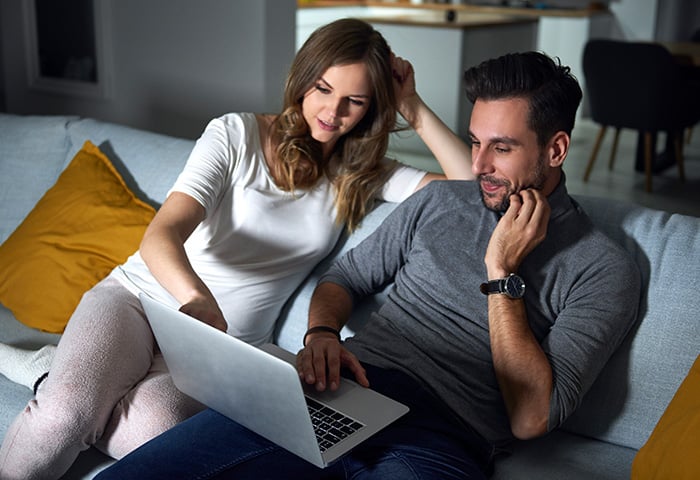 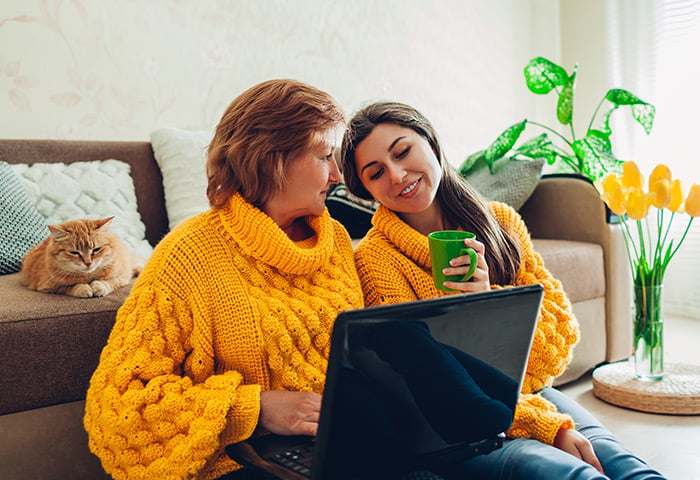 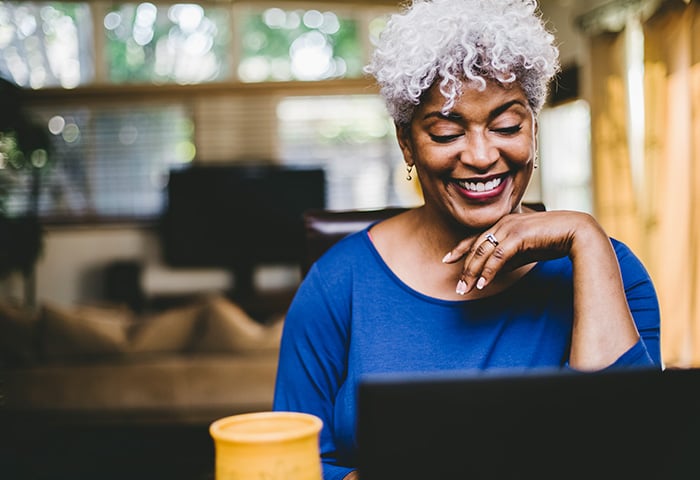