Half Your PC Apps Are out of Date
— Fix Them Now

Wine gets better with age. Software doesn’t. Probably the most overlooked factor for PC bugs and vulnerabilities is out-of-date programs. In an anonymous global study across over 100 million of our users, our new Software Updater built into AVG PC TuneUp found that 52% of the most commonly used programs aren’t being kept up-to-date. These are your Chromes, your Skypes, your WinRARs: the programs we use and rely upon everyday.

Our full PC Report 2017 looks at all statistics and findings from this global study in more detail, but for now, we’ll just focus on the highlights of our research on outdated programs.

Over half of the most common PC apps are out of date.

49 Programs on Average, Half of Them Potential Risks

Despite the millions of PC programs out there, the average user only has 49 programs installed. And many of them aren’t really programs, but tools and technologies like Visual Studio Redistributable, Flash or Java, which are required for some websites and other installed programs to actually work.

At any rate, a huge chunk of these applications aren’t running the latest version. This may not seem like a big deal, but it’s the source of problems that range from merely annoying to downright risky.

The blue screen of death is a common symptom of out of date apps.

Why so many programs don’t get updated

It would be easy to lay the blame on out of date apps on the laziness of most users. Checking each program for updates takes the word chore to a whole new level. But developers should know this better than anyone. The most out of date applications usually have easy-to-ignore updaters, don’t even check for updates at all, or just plain don’t get updates.

On the other end of the spectrum are applications that automatically update themselves in the background or very effectively nag you whenever there’s an update.

Even a 90% update rate still means millions of users could be left vulnerable.

Our data from over 100 million users  shows Apple’s Safari holds the No. 1 spot, with 90% of users worldwide running the latest release, closely followed by Google Chrome, which is being kept up-to-date on 88% of our sample.

However, when that sample is 100 million strong, we’re still talking millions of people running older versions. Since Chrome and Safari have built-in updaters it’s likely that users have either turned off these updates, keep ignoring them or work in a business environment in which their admins prevent updates.

How to update your programs

Setting aside the benefits on compatibility and new features, the security fixes alone are important enough that you shouldn’t ignore updates. Whenever you see a prompt for an application update, just do it as soon as you can.

If you’ve got an applications that never seem to bother you for updates, try to find their Settings, Properties, Tools or Help section and look for the update item: 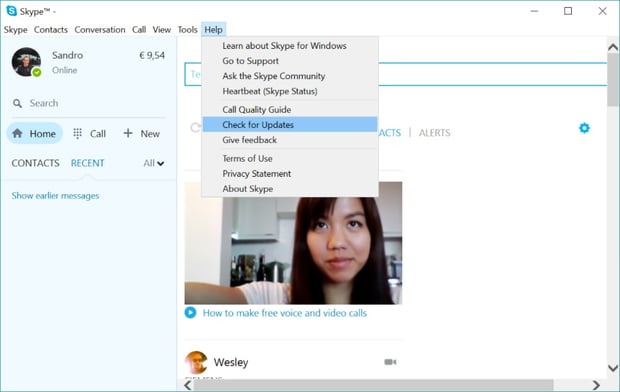 Checking for updates in Skype.

Doing this on a regular basis is annoying, which is why we built our new software updater right into AVG PC TuneUp. 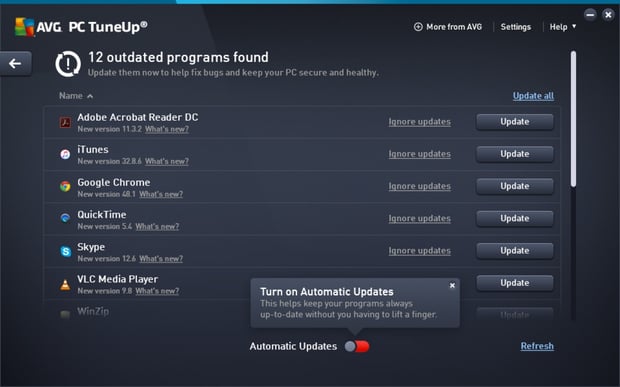 It supports almost 50 of the most used applications (and growing) and regularly checks & updates these applications silently in the background. If you’re more  hands-on, you can also manually check the updates to see what’s new in each application.

If you already have it installed, you should be getting the update soon. If you don't have it yet, you can try AVG PC TuneUp free for 30 days now.