The Secret Life of Apps Revealed

How do apps really affect your smartphone? We’ve conducted the first Android App Performance Report to find out.

Have you ever noticed that your smartphone has surprisingly little storage space left for things like photos or even the latest updates? Or that battery life and reliability have begun to deteriorate over time? Or perhaps that your monthly data usage is growing inexplicably? Over time, the apps we love and use day in and day out affect our tablets or phones and impact their performance – sometimes while you’re using them, and sometimes completely invisible in the background

We decided to investigate to see if we could better understand how apps influence devices over time in our first Android App Performance Report (Q2/Q3 2014).

When it comes to the performance of our phones, we noticed that users care about three things above all else:

We felt that in order for the report to reflect what is happening to people’s phones out there in the real world, we needed to use data from real devices. Unlike other tests that might conduct benchmarking in a lab environment it was important to us that these results applied to everyday smartphone users. 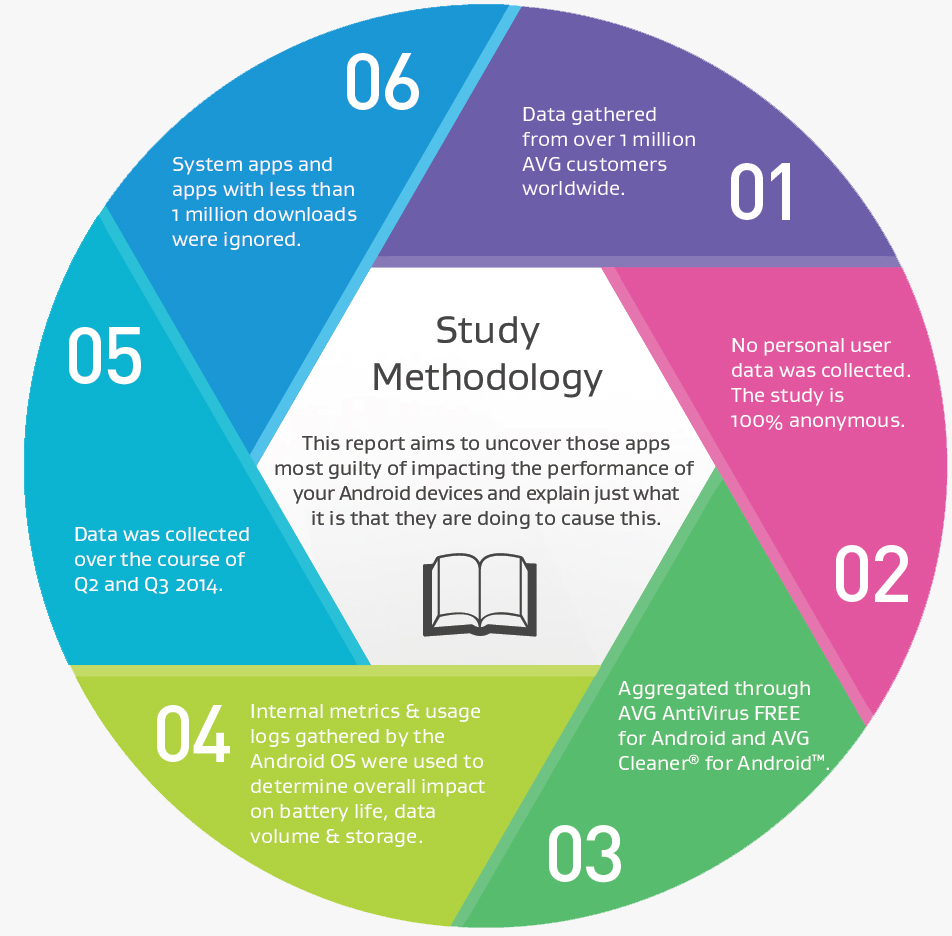 So with that in mind, we analyzed anonymized data from over one million AVG Android app users, so that we could better understand which apps they are using and how those apps affect their devices.

Some of the results were quite surprising.

Pre-installed apps
One of the most interesting learnings we made in the first report is that many devices are still carrying around a lot of apps that were installed by the manufacturer. These can take up a lot of storage space but more importantly can drain battery life – something that is already under strain with the constant use of most smartphones.

Apps with background activity
Another thing that became clear was that as we add more apps to our devices, we seldom remove the ones we no longer want or need. Over time this means that the limited resources of our devices are divided over an ever growing number of apps, affecting performance.

The reason for this is simple: the “always on” nature of apps means that they often-times continue to run in the background to check for notifications, updates or download data which uses valuable battery and data.

Social and News apps
It will come as little surprise that with its constant background notification checks, which run even when the app is not open, the social networking app from Facebook emerged as having the biggest impact on your mobile device when it comes to overall performance. The constant demand and transmission of data makes the app a real drain on both battery life and data use.

App growth
As we ran the report over several months, we observed some interesting behavior amongst apps that are automatically updated. Over time, their storage footprint and battery drain both increased. This is mostly due to downloaded content (songs for Spotify, items in games etc.), but is also in part thanks to automatic updates. With automatic updates enabled, developers can push out new versions and features that take up more space and are more resource heavy without having to ask the users permission. Combine this with the steadily growing number of apps we have on our devices (including those that we’ve downloaded and no longer use) and very soon you begin to observe a noticeable dip in performance.

What can you do to improve your device performance?
One of the most fundamental issues that the report has raised is that keeping your smartphone running in top condition is quite a labor intensive task. Keeping check of which apps are running in the background and removing apps that you don’t use is more than enough for most of us to commit to.

There are products that are designed to make your life easier though like AVG Cleaner for Android which can show you how much data, storage and battery life each of your apps is consuming to help you take the right actions to tackle any issues.

Our full report doesn’t just detail what apps are the most consuming of them all, it also details best practices and helps you get rid of performance hogs on your Android smartphone or tablet.